The President of the Society of Motor Manufacturers and Traders (SMMT), Tony Walker, this evening urged government not to undermine the UK automotive industry’s hard won competitiveness due to slow progress on Brexit. Speaking at the Society’s 101st Annual Dinner in London, he said there is no substitute for free and frictionless trade, and called for quicker progress on agreeing a transition period following Brexit. 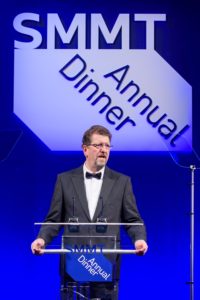 Tony Walker, President
of the SMMT gives
his keynote speech at the
SMMT Annual Dinner

Addressing more than 1,100 industry leaders, government representatives and other stakeholders, the President said that while the Prime Minister has embraced the need for a period of transition to avoid a post-Brexit cliff edge, “we need to see concrete progress – and quickly.” This transition, he added, “should be on the current terms and, crucially, not time-limited” to give industry time to adjust and secure long-term investment decisions. He continued, “We will never stop striving to be competitive. But we ask government to help provide the conditions in which we can compete. Like every other industry, we need certainty now.”

Praising the sector for its transformation over the past 25 years, Tony Walker said, “As an industry we are strong, resilient, and innovative. Not fearful of the future but keen to grasp the opportunities we are creating together. I am very proud that today our UK automotive industry competes globally on quality, productivity, flexibility and cost. We have delivered an export-led renaissance. But we are not complacent. Competitiveness comes hard-won. It can be easily lost. A hard Brexit would undermine all that we have collectively achieved. It is a real threat – a hurdle we cannot ignore.”

He stated that the lack of progress over Brexit was already having an impact on the automotive sector: “We have huge challenges. Consumer confidence has fallen leading to a downturn in sales. Uncertainty about Brexit – and market confusion over diesel – are taking their toll.”

WATCH: 2017 has been huge year for #UKAutomotive – our review of the year has all the highlights pic.twitter.com/T4WY9Y9JEm

Walker said, “After all the difficulties we have overcome, all the changes we have made and the innovations we have brought, we do not need trade barriers to be our next challenge. We are an industry with the character to overcome major obstacles. And we are working hard to maintain our competitiveness. But don’t test our character unnecessarily.” He added, “In the last forty years we have succeeded. We have torn down so many barriers. Please don’t allow new ones to be erected.”

He spoke as SMMT released new figures illustrating the high stakes of a no deal Brexit for the sector. The risk comes not just from costly WTO tariffs – which would add at least £4.5 billion to the industry’s annual overheads – but also from the imposition of customs checks, red tape and fees on goods that currently move friction free across borders.

Every day, more than 1,100 trucks1 for UK car plants cross into the UK from the continent – the vast majority without being checked at customs – to deliver some £35 million worth of components2 to UK vehicle and engine plants. And every day, these components help build 6,600 cars and 9,800 engines3 – the bulk of which are then shipped back to EU customers and assembly plants. 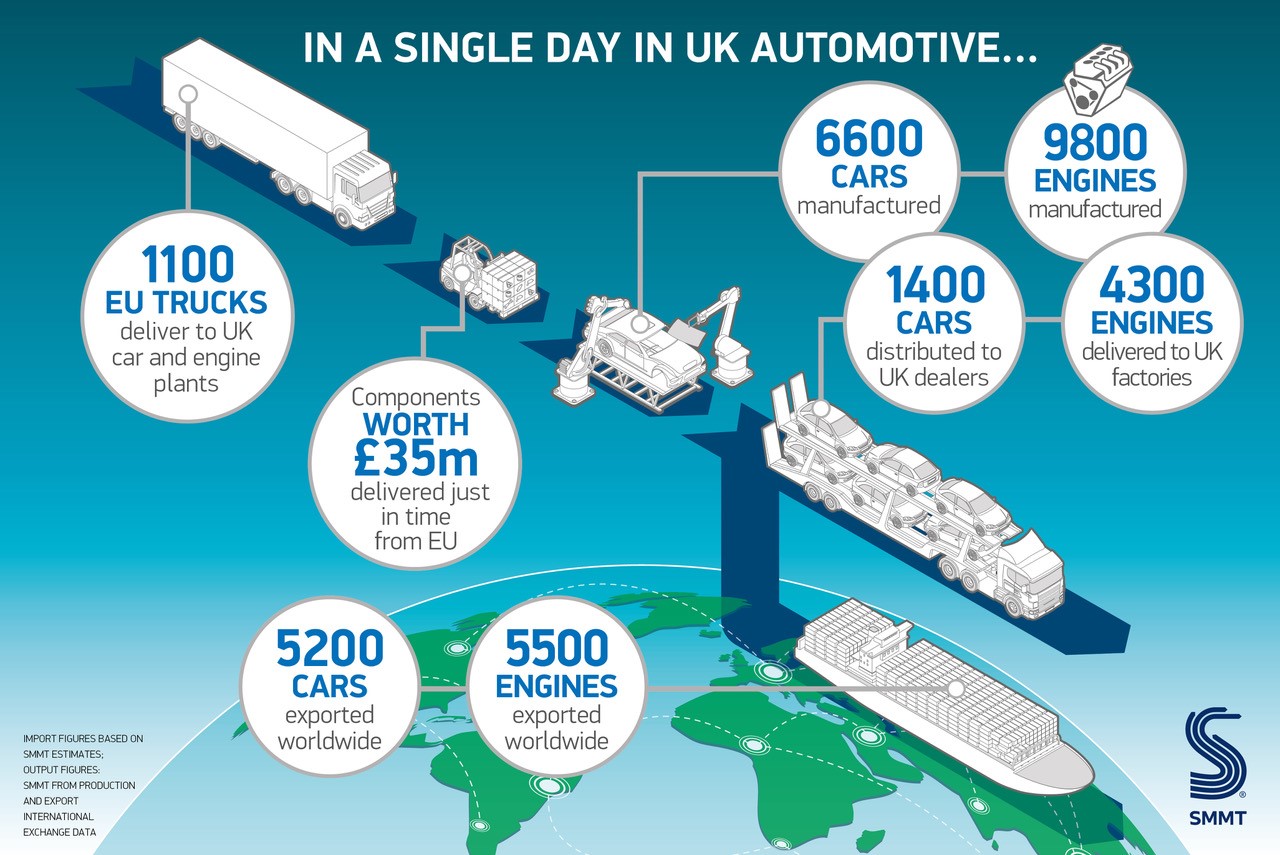 The President was joined at the event by the Secretary of State for Business, Energy and Industrial Strategy Greg Clark MP. He thanked him for the “strong and ongoing cooperation between our industry and Government” and for developing “a modern and effective industrial strategy” and his “support for the work of the UK Automotive Council.” 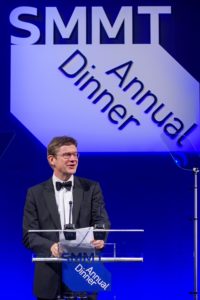 The Council was established to enhance dialogue and strengthen cooperation between the UK government and the automotive sector. Tony Walker also highlighted other significant achievements in government industry collaboration including the “Advanced Propulsion Centre and the Centre for Connected and Autonomous Vehicles” and he added we “welcome and endorse such announcements as the Faraday challenge.”

The President’s speech also addressed the issue of air quality and the automotive sector’s ongoing efforts to invest in new technology and improve air quality in our towns and cities. He said, “We have invested billions of pounds in clean, low emission technologies. Leading change by electrifying the market through the introduction of hybrids, plug-in hybrids, battery electric vehicles and hydrogen fuel cell cars. The internal combustion engine is not dead – it is the path to a cleaner and greener future. Banning diesel and petrol cars might be a sound bite that works but it’s not a policy that works. If you ban them you disrupt the new car market and you hamper investment in the electric, emission-free vehicles of tomorrow. You set the future back.”

The automotive sector has been keen to highlight that the latest Euro 6 vehicles bring significant benefits in terms of low emissions and meeting our climate change targets, and these newer, cleaner vehicles should not be unfairly penalised in government plans.