The 2019 Hyundai Nexo is a distinctively styled and luxurious C-class SUV based upon Hyundai’s first fully dedicated fuel-cell electric vehicle (FCEV) platform. A technological flagship for Hyundai, the front-wheel-drive Nexo is the most refined fuel-cell (FC) offering to date, and also trumps the Toyota Mirai and Honda Clarity via a trendier and more practical SUV format. Like its two Japanese competitors, the Korean offering will face the same geographically limited availability until hydrogen refueling infrastructures catch up with these long-range electrified platforms.

Speaking of range, Hyundai claims the Nexo (in base “Blue” trim) is the world’s longest-range EV at 380 miles (Honda claims a 366-mile range for the Clarity FCEV; Tesla 335 miles for its 100D sedan), and unlike a battery electric vehicle (BEV), it can be refueled in five minutes. We spent a day in the Los Angeles area piloting the Nexo in normal workday traffic and could not help feeling like we were driving around in (a very quiet) future.

The 2019 Hyundai Nexo is Hyundai’s second-generation FCEV and also its second SUV, the first being the Tucson FCEV introduced in 2013. Compared to the Tucson FCEV, the Nexo’s revamped FC powertrain is 14% lighter and takes up 18% less volume thanks to better module integration. Packaging is also improved, with FC stack hardware contained beneath the Nexo’s hood and the high-voltage battery (along with a separate 12-volt lithium-ion battery for accessory power) shuttled back below the rear load floor. 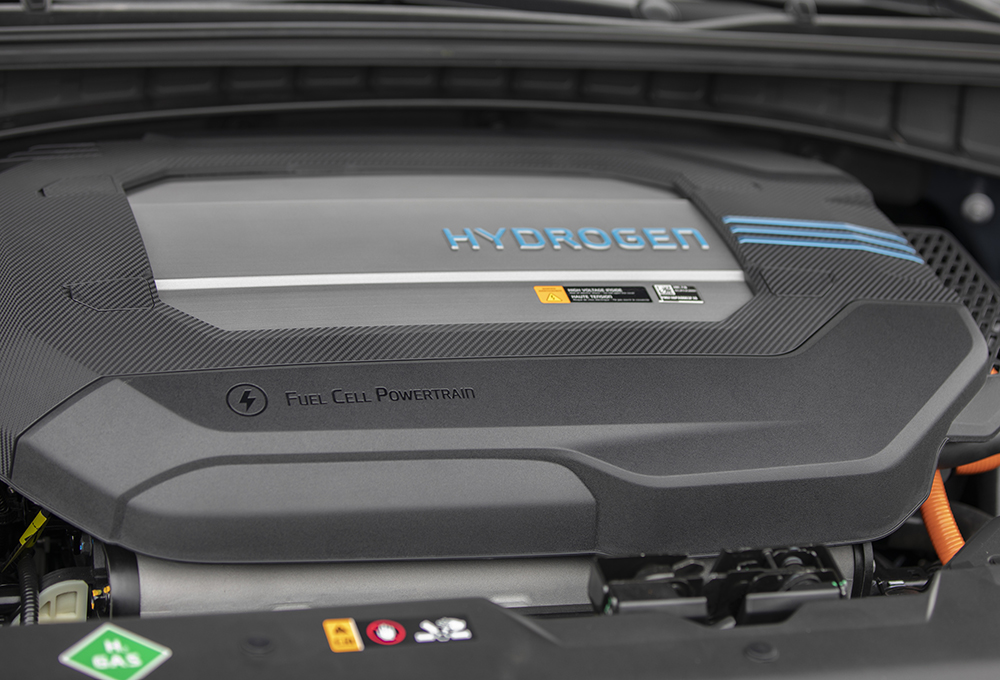 The dedicated vehicle architecture and bespoke independent rear suspension permits the Nexo to use three 52-L (13.7 gal) hydrogen storage tanks (right) compared to the torsion-beam Tucson FCEV’s two alternate-sized tanks, netting a total capacity of 156 L (41.2 gal). The result is increased rear cargo volume (5.8 ft3 more than Tucson FCEV) even with the battery relocated beneath the trunk’s floor. The 700-bar (10,000-psi) tanks are also more efficient with an improved weight ratio – up from the Tucson FCEV’s 5.6 kg to the Nexo’s 6.3 kg.

Compared to the Tucson FCEV, Hyundai claims the Nexo produces an additional 70 lb·ft, accelerates from 0-60 mph 20% faster (9.5 s) and has 40% more range. The base Nexo Blue model has an estimated driving range of 380 miles and an EPA city/hwy/combined MPGe rating of 65/58/61, with the Limited trim’s range estimated at 354 miles (59/54/57 MPGe) due to additional content and increased rolling resistance from its standard 19-inch wheels/tires.

Hyundai claims the Nexo has an industry-leading 30-second cold-start capability. Other improvements to its 2nd-gen system reduce refueling times, and a more efficient air-supply system improves performance at higher altitudes. Side benefits are the stack’s ability to filter particulate matter and fine dust – essentially cleaning the atmosphere as you drive – and potential future applications where a docked vehicle could provide both electricity and water to a home.

The 2019 Hyundai Nexo uses a new, dedicated platform designed around a fuel-cell architecture, and employs the latest advanced high-strength steels to improve rigidity and reduce weight. Hyundai claims a base curb weight of 3,990 lb (1,810 kg) for the base Blue trim on a 109.8-in wheelbase, which is almost 6 inches longer than the Tucson FCEV. Dimensions that also expanded in relation to the Tucson FCEV include width (+1.5 in) and length (+10.3 in) while the more stylish roofline drops 1.0 in.

As part of its carbon-reducing mission, the Nexo applies bio materials to 47 different parts, cutting 26 lb. of CO2 during the manufacturing process, and ecological materials used in construction include soybean-oil based polyurethane paint, bamboo-thread-based bio fabric, vegan-based leatherette seating surfaces and bio-plastic and carpet extracted from sugar cane.

As a tech flagship, the Nexo is loaded with driver assist/warning features from the Hyundai portfolio, including forward collision, lane following and rear cross-traffic assists, combined with blind-spot and surround-view monitors. A remote parking system will autonomously park or retrieve the Nexo from either a parallel or perpendicular parking space with or without a driver in the vehicle, and can also back the Nexo into a parking spot.

A notably expansive 12.3-inch touchscreen handles audio and navigation functions, while the driver gets a 7-inch display for the gauge cluster. Transmission control is via a push-button shift-by-wire design, opening up center-console space for the Qi wireless-charging pad. Apple CarPlay and Android Auto support are standard, and the Nexo features two available audio systems from Samsung-owned Harman, including a 440-watt, eight-channel Krell system, a name which should resonate with audiophiles

The Nexo’s remote-start function includes a Hyundai-first remote heated and cooled seats, and other connected features via Hyundai’s Blue Link system include a hydrogen fuel-station locator, real-time range and fuel level, and a monthly health report with on-demand diagnostics of the hydrogen system.