JCB is preparing to supply Stage V compliant motors across its gear lines, with updates to its own engine range and modifications to provider models. Group director of motors Alan Tolley explained that the company has preferred to tackle emissions inside the combustion system, as opposed to just adding after treatment to the exhaust system, however, for Phase V, diesel particulate filters and the selective catalytic reduction will become necessary. Stage V calls for further reduction in particulate matter, but it’s been our attention for quite a long time, said Tolley. JCB totally believes that diesel engines will continue to play a role in powering construction gear for the foreseeable future.

The motor, which is fitted to a lot Of the business’s Loadall telescopic handlers, its backhoe loaders and big platform slide steer and compact tracked loaders, is outfitted with an one can, DPF/DOC. The 430 has hydraulic valve lash adjusters and a sealed for life crankcase ventilation module, eliminating filter replacement. It boasts auto stop technology to further reduce emissions. Service intervals remain at 500 hours. Higher up the power scope, JCB has chosen for a 210-kW Cummins QSB6.7 diesel engines to power its 457 wheeled loading shovel in Stage V states. 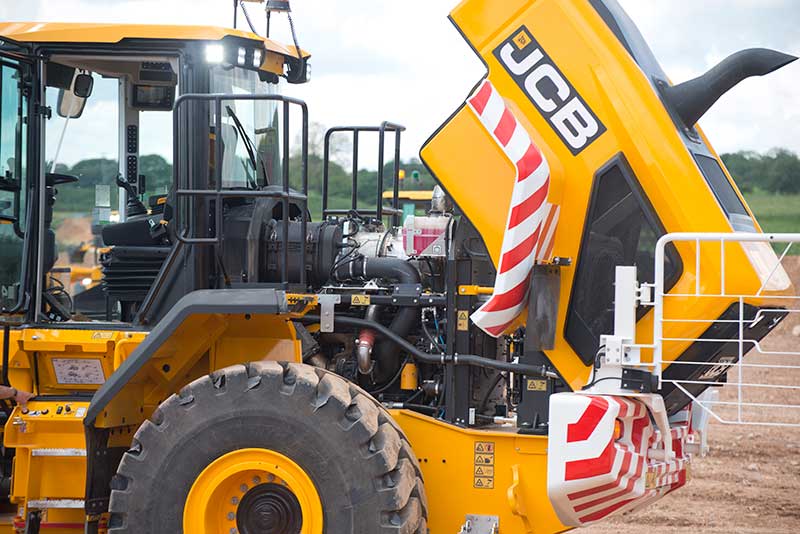 Operators will be capable to pick between two power modes from inside the taxi, reducing engine output to 167 kW in tasks easier to cut gas consumption and emissions. The device will now be equipped as standard with a five speed Powershift transmission, in place of the previous four rate unit. Telematics inform us that many machines around the globe are only running at part load, thus we’ve designed power manners onto the machines, stated Joe Eddlestone, wheeled loader product marketing manager. The Cummins engine is going to be equipped with an auto shutdown feature along with the combination of the new engine and the transmission will probably deliver a claimed ten percent improvement in fuel consumption.

A wide core cooling package, formerly An alternative on the 457, will become standard on the Cummins powered loader.

The 457 will continue to be powered by a 192-kW MTU engine in Tier 4 Final territories like North America, as the MTU engine meets the emission standard without using a DPF. JCB will also utilize Phase V Cummins motors in its own 437 and 427 models. 437 gets a power boost in Stage V, from 136 to 145 kW. The 427 will be outfitted with a 123-kW Cummins motor. The two machines also adopt a five speed Powershift transmission and auto shutdown, whilst the 437 also comes along with a low power mode.

The smaller sized 407 and 409 loaders will continue to use JCB Diesel by Kohler engines to satisfy Stage V, however now with the addition of a DPF. Power outputs are unchanged, though auto shutdown has now been included. The 407 will also come with a “whisper peaceful” Rexroth hydraulic pump to decrease overall sound levels. An Eco Drive Mode has actually also been incorporated in the hydrostatic driveline, to make up to a 16% fuel saving at greater speeds.

For the tiniest 403 model, JCB will use an option of the existing 26-kW (36-hp) engine, alongside a Smart Power 19-kW (25-hp) version, for those clients seeking supreme fuel economy.