The falling cost of natural gas and its increasing use for electricity generation has helped build the environmental appeal of battery electric vehicles. BEV advocates point to the 95% efficiency of the electric motor, which compares with the 40% – 42% brake thermal efficiency (BTE) of some advanced gasoline engines now in production. These numbers, however, are misleading in both cases.

The ~40% BTE for gasoline engines is at high load; the number drops to 30% and even less under other operating conditions. BEVs also have substantial electro-thermal losses, though less obvious than those related to ICEs. They were identified and quantified in expert presentations at the recent 2018 SAE Thermal Management Systems Symposium (TMSS) in San Diego, Calif.

The DC-DC converter, power electronics, and battery charging/discharging cycles produce significant amounts of heat. And there are electrical energy losses that may total up to 40%, noted Alfred Jeckel, an engineer in high-voltage battery design and testing at Daimler. The need for liquid cooling to carry away heat is there.

While electric propulsion appears to have an efficiency advantage vs. the delivered cost of gasoline and its losses in the forms of exhaust and waste heat, the net effects are close when the energy to produce the electricity is factored in. As Jeckel explained, the sizing and weight of the lithium-ion battery pack are major contributors to a BEV’s cost. There are also the resulting issues of range, recharging time, and the deteriorating effects on lithium-ion batteries in high-voltage, high-rate charging.

Beyond the near term, Jeckel noted the development underway of solid-state batteries, which would open the path to alternative chemistries with lower flammability than today’s lithium-ion types.  For the same energy density, the solid-state type would be more compact and lighter in weight.  Further, it could provide a greater thermal operating range which might permit passive rather than active cooling—another area of potential space and weight saving. The designs under investigation at Daimler would need insulation and heating, Jeckel stated, and they deliver less power because of the slower internal movement of electrons. 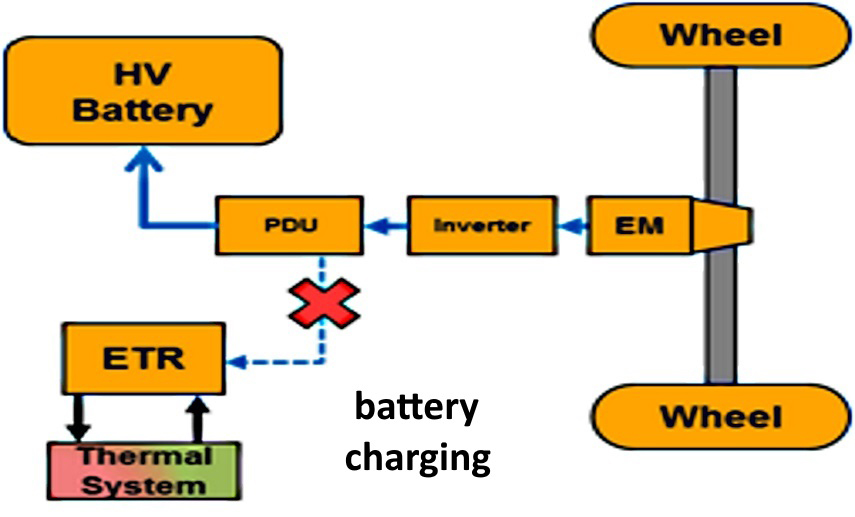 Experts speaking at the SAE TMSS addressed the issue of BEV waste heat in several presentations. To work around the issues of high-voltage, high-rate charging and greater battery density for higher capacity in BEVs, the present engineering focus is on liquid cooling. Air cooling doesn’t do the job anymore for other than the small packs in hybrids, and only liquid cooling permits well-targeted use of waste heat.
According to keynote speaker Antonio Vespa of the Hyundai-Kia America Technical Center Inc. (HATCI), “We were waste-heat-disposal engineers.  Now we’re heat-energy-management engineers,” a role that includes the need to collect and use that heat energy. Wisely using that heat energy beats adding more costly battery capacity or even a heat pump, Vespa pointed out. HATCI has been working with Hanon Systems and the National Renewable Energy Laboratory on projects in that area.

The 2018 Kia Soul BEV, he said, has a heat pump option. It’s a costly addition, he admitted, particularly considering that the Soul is a medium-range (150-mi/250-km) comparatively lower-priced BEV. However, Korean market incentives have justified its availability, and it has been a popular option even in the U.S., Vespa said. Under development for future BEVs, he said, are “really big refrigeration systems for rapid charging – 100+ Kw – and power electronics waste heat management and recovery,” using liquid cooling. 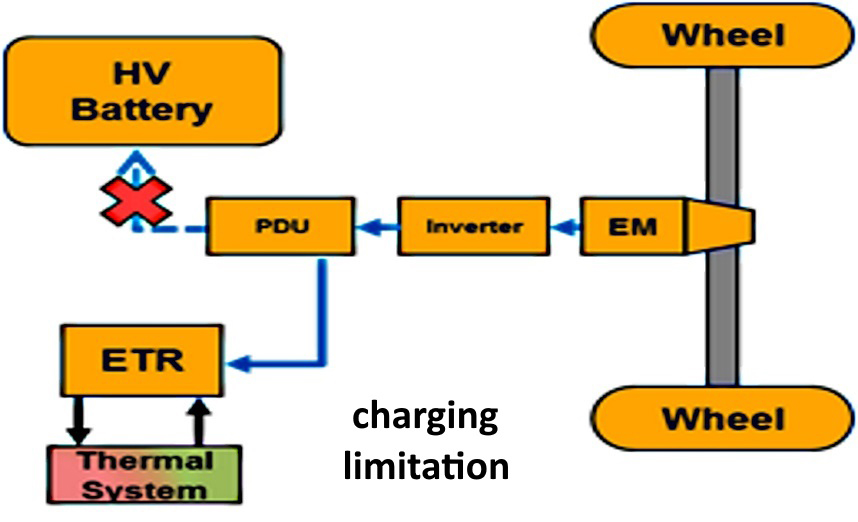 Continental Automotive Systems proposed an Electro-Thermal Recuperator (ETR) as an approach for a liquid cooling system for a BEV.  The ETR, detailed by Aravind Ramakrishnan, senior development engineer for sensors and actuators, is intended to collect waste heat from regenerative braking.  As he pointed out, battery pack size and state of charge, along with possible effects of very low ambient temperatures, often prevent full use of available regenerative braking energy in the form of recharging the battery.

When the battery pack is unable to accept charge, the ETR circuit, under computer control, opens to heat coolant for cabin warmth. The ETR design, weighing about 3 kg (6.6 lb) has a controller area network (CAN) interface for computer control, and a built-in resistance heating layer for additional cabin heat if needed.  It was run in a simulation through a U.S. Federal Test Procedure (FTP city cycle) at -20° C (-4° F) with a 90% initial state of charge. This meant a fully-charged pack and almost all available regenerative energy would go to heating the coolant.

Based on the simulation studies of a compact BEV with a 64 kW·h battery pack, Ramakrishnan said potential energy savings were 5-12%. Additionally, the layout of the system would also permit integration with coolant loops for battery and powertrain. 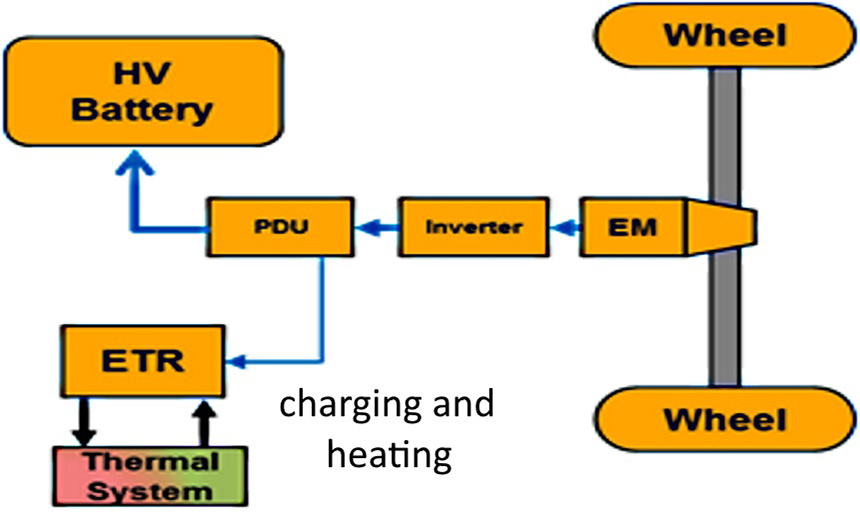 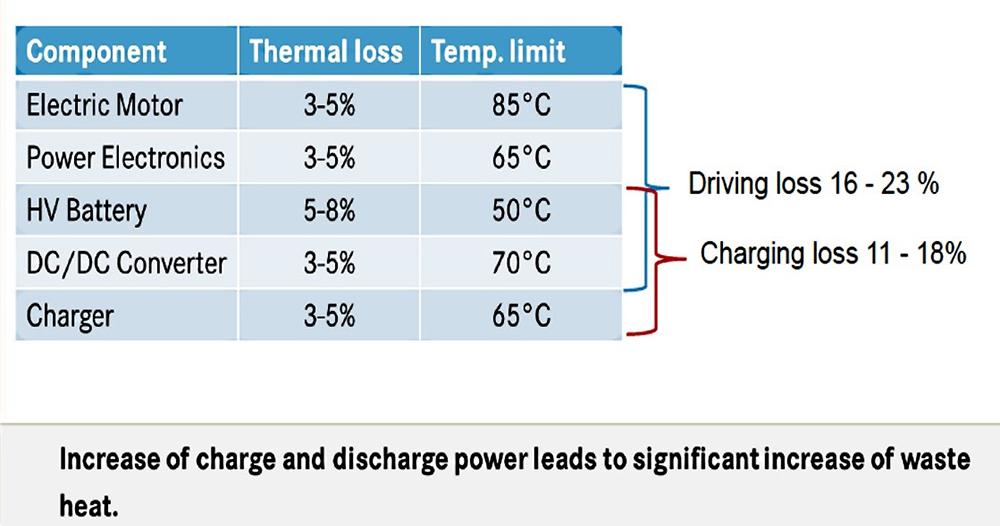